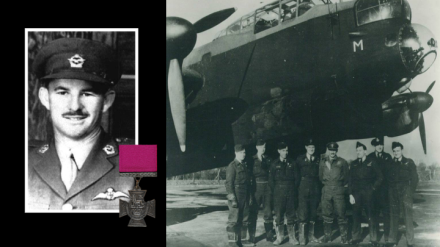 Edwin (Ted) Swales VC DFC is one of South Africa’s greatest sons,  yet the South African politicians  of today,  have removed his name from the well known “Edwin Swales Drive” named in honour of him in Durban and re-named it after a contemporary “struggle” cadre.  The legacy of Maj. Swales VC DFC is under threat, and there is very good and noble reason not to forget him, this is his story, kindly contributed to by David Bennett.

He served in Kenya; Abyssinia; Italian Somalia; British Somalia and Eritrea. Then (1941) in North Africa. In 1942, he left the army to join the S.A. Air Force. Swales received his wings at Kimberley in 1943. Then seconded to the Royal Air Force in 1943, he attended Flying Training School at  R.A.F. Little Rissington, 1944. Later sent to the elite R.A.F. Pathfinder Force, 582 Squadron, Royal Air Force, at Little Staughton in July 1944.

Swales was awarded an immediate D.F.C. on 23 December 1944 following a bombing raid on Cologne. After a raid on Pforzheim on 23 February 1945, Swales was killed in action, crashing near Valenciennes, France and he was awarded a posthumous Victoria Cross.

Swales is now buried in the War Cemetery at Leopoldsburg, near Limburg, Belgium, Plot No.8, Row C, Grave No.5. (Although he had originally been buried at Fosse’s USA Cemetery). The headstone of Swales’ grave shows the Springbok head, common to the graves of all South Africans, as well as the Victoria Cross engraved on it. The legend on the headstone states:

Edwin Swales was awarded the Distinguished Flying Cross, on 23 December, 1944.  The citation reads:

The KING has been graciously pleased to approve the following award in recognition of gallantry and devotion to duty in the execution of air operations:-

“This Officer was pilot and Captain of an aircraft detailed to attack Cologne in December, 1944. When approaching the target, intense anti-aircraft fire was encountered. Despite this, a good bombing attack was executed. Soon afterwards the aircraft was attacked by five enemy aircraft. In the ensuing fights, Capt. Swales manoeuvred with great skill. As a result his gunners were able to bring effective fire to bear upon the attackers, one of which is believed to have been shot down. Throughout this spirited action Captain Swales displayed exceptional coolness and captaincy, setting a very fine example. This Officer has completed very many sorties during which he has attacked a variety of enemy targets.”           (Official D.F.C. Citation)

Edwin Swales was killed on 23 February, 1945, and he was posthumously awarded the Victoria Cross – the 3rd and last Pathfinder pilot to be so honoured (all alas, posthumous). It had been Swales’ 43rd operational flight for 582 Squadron, R.A.F. Here is the citation:

the under-mentioned officer in recognition of the most conspicuous bravery:-

“Captain Swales was ‘Master Bomber’ of a force of aircraft which attacked Pforzheim on the night of February 23, 1945. As Master Bomber he had the task of locating the target area with precision and of giving aiming instructions to the main force of bombers in his wake.

Soon after he reached the target area he was engaged by an enemy aircraft and one of his engines was put out of action. His rear guns failed. His crippled aircraft was an easy prey for further attacks. Unperturbed, he carried on with his allotted task; clearly and precisely he issued aiming instructions to the main force. Meanwhile the enemy fighter closed the range and fired again. A second engine of Captain Swales’ aircraft was put out of action. Almost defenceless, he stayed over the target area issuing his aiming instructions until he was satisfied that the attack had achieved its purpose. It is now known that the attack was one of the most concentrated and successful of the war.

Captain Swales did not, however, regard his mission as completed. His aircraft was damaged. Its speed had been so much reduced that it could only with difficulty be kept in the air. The blind-flying instruments were no longer working. Determined at all costs to prevent his aircraft and crew from falling into enemy hands, he set course for home. After an hour he flew into thin-layered cloud. He kept his course by skilful flying between the layers, but later heavy cloud and turbulent air conditions were met. The aircraft, by now over friendly territory, became more and more difficult to control; it was losing height steadily. Realising that the situation was desperate Captain Swales ordered his crew to bale out. Time was very short and it required all his exertions to keep the aircraft steady while each of his crew moved in turn to the escape hatch and parachuted to safety. Hardly had the last crew-member jumped when the aircraft plunged to earth. Captain Swales was found dead at the controls.

Intrepid in the attack, courageous in the face of danger, he did his duty to the last, giving his life that his comrades might live”

“…… On every occasion your son proved himself to be a determined fighter and resolute captain of his crew. His devotion to duty and complete disregard for his own safety will remain an example and inspiration to us all …..” 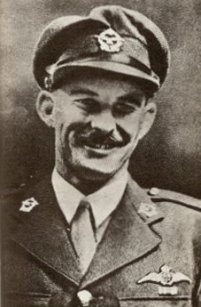 Memorial to Edwin Swales at the secondary school he attended as a student, Durban High School (DHS)

It is our humble opinion, that whilst it is important to segments of South Africa’s population to remember their heroes it should not come at the expense of other national heroes.

Solomon Kalushi Mahlangu, after whom Edwin Swales VC Drive is now named,  was a operative of the African National Congress militant wing, Umkhonto we Sizwe, and whilst it is important to the current ANC ruling party to highlight the sacrifice of its heroes, it should not come at the sacrifice of Maj. Swales’ legacy – one of a handful of South African World War 2 Victoria Cross winners, and one whose extremely brave deeds were awarded in a war which was to liberate the entire western world of tyrannical and rather deadly racial political philosophy as well as dictatorial megalomaniacs supporting such ideology.

In fact to rectify the situation, the Durban City Council should actually consider a monument or statue in the centre of Durban to Edwin Swales and allow him to take his rightful place as a true son of South Africa and one of our all time greatest military heroes, as is the case for many Victoria Cross winners the world over.  That his actions and deeds are taught to South African youth, pride in our WW2 history established and his sacrifice not forgotten.  Lets hope they see their way clear to do this.

Note:    The papers from the South African Air Force, promoting Edwin Swales from Captain to Major, only reached the British authorities after his death, and after the award of the Victoria Cross was gazetted, hence the rank of “Captain” being used in the VC citation. However, he is referred to as a Major.

Thank you to David Bennett for both photograph and content contribution.

12 thoughts on “Edwin Swales VC DFC, a South African Hero whose legacy has been eroded!”