Here is a another fantastic colourised photograph of a South African WW2 hero with an extraordinary tale of heroism. Lieutenant Albert Sachs – a member of the South African Air Force (SAAF) who was seconded to No. 92 Squadron of the Royal Air Force.  Here he is seen sitting on his Supermarine Spitfire Mark VIII at Canne in Italy.

This very heroic South African, known as ‘Bertie’ to his friends is best explained in his own Sortie Reports and Squadron Reports:

‘I was flying Yellow 3. At 0935 I saw 10+ 109s and 190s which we had been warned of by Control, bombing along the secondary road parallel with the Sangro River towards the River mouth.

I dived on them and as I approached they turned and began straffing the road towards the mountains. I closed in on a 190 and fired several bursts from quarter astern and astern from 250 – 50 yds. He dived N.W. along the side of the mountain and after seeing strikes on the cockpit I saw the A/C (aircraft) half roll and it crashed in the vicinity of H.1898.

I then broke slightly up as a Warhawk was on the (Me) 190s No 2s tail. The Warhawk fired several shots none of which hit the E/A. He then broke up and I closed in on the 190 and fired a burst at quarter astern from 100 yds. getting strikes on the wing roots, as I was firing the Warhawk flew through my sights so I broke away and then lost sight of the 190. I then rejoined the Patrol.

Editors Note: the Warhawk referred to here is another Allied aircraft – the Curtiss P-40 – see below, the variants flown by the RAF and Commonwealth forces knew it as a ‘Kittyhawk’ (some variants also became knows as ‘Tomahawks’), the United States Air Force and other US armed forces called it a ‘Warhawk’ – see below.

On the 5th of December 1943 Lt. Albert Sachs scored the 99th and 100th victories for his Squadron when he shot down two Focke Wulf Fw 190s near Pescara, before colliding with a third Fw 190 and being forced to bale out.

The Officer Record Brief entry for 92 Squadron provides the following, detailed insight into this engagement:

‘Lt. Sachs destroyed two FW 190s and probably destroyed another. His story is an epic. He positioned himself behind the twelve-plus fighter-bombers while two others attacked the fighter cover. After destroying an FW 190 with a one-second burst, Lt. Sachs saw another on the tail of a Spitfire, so he turned into it, firing a 30-degree deflection shot, then fired again from point-blank range astern.

The aircraft blew up, and portions hit Sachs’ windscreen, smashing it, while another large piece struck his starboard wing.

FW 190s were then diving on him from both sides and one shell exploded on his tail plane, blowing off his starboard elevator. He turned toward another FW 190 which as attacking him at point-blank range on his port side, and felt a jar as he collided with it. The enemy aircraft dived away out of control minus its fin and rudder.

The attack continued and finally, after his elevator and aileron control were useless, Lt. Sachs was forced to bail out. He landed safely in his own lines within 60 yards of the wreckage of his Spitfire.’

He was discovered by ‘friendly’ Italians and was able to return to his Squadron to fight another day.  After a period as a flying instructor in the United Kingdom, Sachs, now a Major, returned to Italy to command No. 93 Squadron RAF from September 1944 to February 1945.

In September 1944 No.93 Squadron was moved from operations covering the D-Day (Operation Overlord) forces and moved to Italy, where it operated as a fighter-bomber squadron until the end of the war. At the end of the war the squadron took part in the occupation of Austria, before being disbanded in September 1945.  Albert Sachs was awarded the Distinguished Flying Cross (DFC).

Here pilots from No. 93 Squadron RAF Detachment under Albert Sachs command leave their dugout for a scramble at Nettuno, Italy. Leading the way, from left to right, are: Flying Officer E Stewart of Ipswich, Suffolk; Lieutenant J Marais SAAF of Johannesburg, South Africa, and Sergeant D Karck of Cockerham, Lancashire. 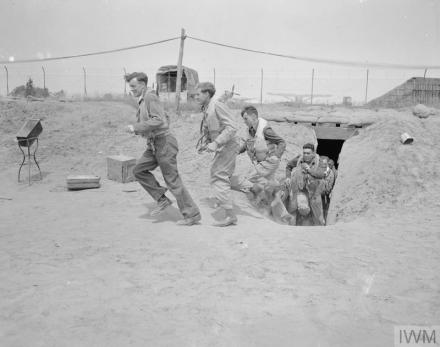