During World War 1 a non-Jewish German fighter pilot did something very unusual, he painted a ‘Star of David’ – the Magen David, the modern symbol of Jewish identity on the side of his aircraft.  The act was in defiance of anti-Semitism and it has a very unusual South African connection.

Leutnant (Lieutenant) Adolf Auer was the German fighter pilot and he did this defiant act because he disliked Hermann Göring’s anti-Semitism and anti-semitic comments.  Auer’s wingman was a German Jew and also a highly decorated German WW1 fighter ace, his name was Willi Rosenstein.

The Star of David clearly be seen on Auer’s aircraft

Before Hermann Göring became the infamous right hand man to Adolf Hitler during the Second World War he was a very successful fighter pilot during World War 1, he shot down 22 enemy aircraft making him an Ace and was even eventually appointed as the successor to Manfred von Richthofen – the legendary Red Baron – as the commander of Jagdgeschwader 1 (‘The Flying Circus’) on 14th July 1918.

Between the 17th May 1917 and 28 July 1918 Leutnant (Lieutenant) Herman Göring was the Commanding Officer of Royal Prussian Jagdstaffel 27 (Jasta 27) hunting group, Willi Rosenstein was also part of Jasta 27 and at the time flew as Göring’s wing man.

Hermann Göring in the cockpit of his bi-plane fighter

During the First World War the anti-Jewish issue in Germany was a latent one but simmering, many Jewish Germans served with distinction in Germany’s armed forces in WW1 and it was just Hermann Göring personal anti-Semitism at the time that he clearly carried with him into the Second World War.

In late 1917 an incident occurred in which Rosenstein became very upset after Lt. Goering made an anti-Semitic remark in front of several people; Rosenstein requested an apology but when Göring refused, Rosenstein asked for a transfer out of Jasta 27.

Willi Rosenstein then joined Jasta 40, and flew as the wing man to Adolf Auer.  In defiance to anti-Semitism and to derogatory comments Hermann Göring had made as to Rosentein whilst he was his wing-man, Auer painted a Star of David on the side of his fighter, this was done to annoy Herman Göring and stand up for his fellow Jewish comrade, he famously said that he would rather be saved by a Jewish pilot than die in a plane crash.

Simply put Göring hated Jews and was an unabashed anti-semitic, after WW1 he joined the Nazi party and rose to become a key leader of Hitler’s Third Reich.  His intense hatred of Jews would eventually lead him to become one of the architects of the Holocaust in the Second World War, even ordering a high-ranking Nazi official to organise the solution to the ‘Jewish Question’ – which in reality meant the extermination of the Jews of Europe in gas chambers and in front of firing squads.  A keen art enthusiast Göring even went as far as illegally appropriating important art work from Jewish victims of the genocide. 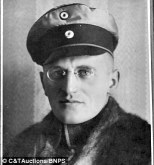 Lt. Adolf Auer’s combat record in WW1 is however very short, he scored one victory during the war and was wounded in action when he was brought down on 28th October 1918 and taken Prisoner of War

When World War 2 broke out, Adolf Auer joined the German Luftwaffe, which by this time was headed up by Hermann Göring and although Göring rose to become one of Adolf Hitler’s closest advisers and the second-most-powerful Nazi during World War 2, it appears Göering did not penalize Auer for his antics of painting a Star of David on his aircraft during World War 1 (it was a different time).  However if he had pulled the same stunt in World War 2 he would surely have been severely punished (it could have led to his arrest or even execution in the Second World War).

A different matter for Willi Rosenstein who went on to become a rare thing in WW1 – a German Jewish fighter Ace.  He initially volunteered to fight for Imperial Germany in the army, but transferred to De Fliegertruppen (the budding army version of the German Air Force) on 24 August 1914.   As a fighter pilot he won the Iron Cross, Second Class in March 1915 and was also awarded the Silver Military Service Medal.  By February 1916 he was commissioned as a Leutnant (Lieutenant), in April 1916 he was wounded in action during the Battle of Verdun, and eventually received the Iron Cross First Class  having flown 180 combat sorties to that date.  Upon recovery, he reported to the 3rd Army as a Fokker pilot. He became one of the founding members of one of Germany’s brand-new fighter squadrons, Jasta 9 on 23 September 1916.

He moved on to Jasta 27  on 15 February 1917. However, it would not be until 21 September that he scored his first aerial victory, when he shot down an Airco DH4 over Zonnebeke while on a morning patrol. Five days later, his victim was a Sopwith Camel, he scored his third aerial victory on 26 June, when he downed another DH.4

On 2 July 1918, he received his final war posting, to Jasta 40 where he promptly shot down a SE 5a on 14 July. On 28 September, he received the Knight’s Cross 2nd Class with Swords of the Order of the Zahringer Lion. The following day, he began a run of five victories that took him through 27 October 1918.

After World War 1, Willy Rosenstein became a glider pilot sportsman. Because of growing anti-Semitism and the rise of the Nazi Party (and the likes of Hermann Göring) in the 1930s, and despite being a war hero with 9 British kills, he feared for his life and that of his family and fled to South Africa.

Hermann Göring as head of the Luftwaffe –  WW2

Rosenstein settled in South Africa and took to farming, though he kept his interest in aviation. His son Ernest took to his father’s love of flying and became a fighter pilot for the  South African Air Force (SAAF) during the Second World War and attained the rank Lieutenant.  Lt. Ernest Willy Rosenstein was tragically killed in action over Italy on 2 April 1945 fighting for the Allies, ironically fighting against his father’s country of birth with its now deeply evil anti-Sematic Nazi manifestations and Herman Göring’s Lufwaffe  – he was aged only 22.  He is buried at the Milan War Cemetery in eternal memory on the SAAF honour roll.

Willy Rosenstein survived both his son and the war. He was killed on 23 May 1949 in a midair collision with a student pilot over his farm in Rustenburg, South Africa.

Although many Jews served in the German army during WWI, it still appears incongruous to see a Fokker biplane with a Star of David alongside the German Iron Cross in a fighter squadron – Jagdstaffel 40. Adolf Auer was certainly a man who stood by his convictions and his comrades and that is highly commendable by any military code.

Not so commendable is Hermann Göring, now in the annuals of history as one of the most evil men to walk the planet.  After being found guilty after World War 2 of crimes against humanity at the Nuremberg trials, he committed suicide by ingesting cyanide the night before he was to hang for his crimes.

Willy Rosentein enters the annuals of history as a war hero, a fighter ace with an impeccable record.  He’s not only a hero for Germany, but also as a representative of his faith remains a stand out icon and role model.  In the end, as a converted South African citizen we now also have in our midst of military history another remarkable individual whose sacrifice to South Africa’s contribution to modern freedom came in the form of his son.

Lt. Adolf Auer and his gunner