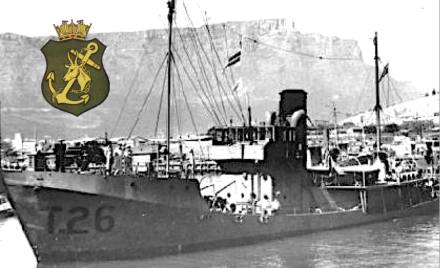 The month of February is also remembered as the “three ships” month in some small South African military veteran circles.  That’s because three of South Africa’s worst military disasters at sea – the SS Mendi (WW1), the SAS President Kruger, and this one the HMSAS Southern Floe (WW2) – all occurred in February.

Much effort by various associations in South Africa is put to remembering the Mendi and the President Kruger, however little regard is given to the SA Navy’s losses in World War 2.  Odd considering that during WW2  the most significant number of South Africans were lost at sea, yet scant regard is put to this epoch of the South African Naval sacrifice by way of remembrance and parades.

In 1941 – the HMSAS Southern Floe (Lt J E Lewis) and HMSAS Southern Sea arrived at Tobruk on 31 January 1941 to take over patrol duties from two of their two sister ships.

Although submarines were not a threat in the first six months of the Western Desert campaign, numerous floating mines pointed to the existence of extensive moored mine fields. Except for the sweeping of the narrow coastal traffic route and harbour entrances at this stage there had not yet been time to locate these fields with any accuracy, much less to clear them. The main duty of the two Southerns was alternately to patrol the nearest section of the swept channel and to escort shipping along it. The port at that time was subject to air raids, littered with sunken wrecks and possibly active ground-mines. On patrol, the duties were complicated by sandstorms that strong off-shore winds extended for many miles out to sea, resulting in low visibility, heavy cross-seas, and much discomfort to personnel. To these conditions were added the menace of the mine fields on one side and an ill-defined and unlighted coast on the other.

On the morning of 11 February Southern Sea arrived at the patrol rendezvous, two miles east of Tobruk, but found no sign of Southern Floe. This was reported but caused no concern at first; it had blown hard enough all night for the ship to find herself far from her station at dawn. However that evening, a passing destroyer picked up one man clinging to some wreckage – all that remained of Southern Floe and her company.

Jones was almost insensible after 14 hours in the water, but afterwards stated that he had been in the stokehold when, at about 04:00 there had been a heavy explosion and the ship had filled rapidly. In the darkness, he had found his way into the flooded engine-room and struggled out through the skylight as the ship sank. He had seen a few other persons in the water at that time and later had done his best to support a wounded man. In the absence of other evidence there is little doubt that a mine, either floating or moored, was the cause.

The loss of the ship, although but a trivial incident in a world war, came as a sudden and grievous blow to the flotilla and to the SDF. The ships had spent a barely one month on the station and at home few were aware that they had arrived and had been in action. The casualties were the first naval losses suffered by the South African Seaward Defence Force and the sense of loss in the service was profound.

A relic of Southern Floe was brought to South Africa long after, in the form of a small brass ship’s badge, found amidst the other debris of battle 70 miles inland from Benghazi. Supposedly it had floated ashore, attached to a wooden fragment of the ship’s bridge, and been carried thence by an Italian souvenir-hunter. 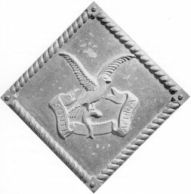 After the war Stoker Jones, the sole survivor placed a memorial notice in the Cape Town newspapers. He continued to do this for many years until he also passed away.

“Under a hail of shells”; Recounting the bravery and loss of HMSAS Bever

The last South African Navy ship to be lost in action; HMSAS Treern

Written and Researched by Peter Dickens. Many thanks to Glen Knox from the South African Naval Museum for the story content and his tireless work keeping this history alive. Casualty Lists of the Royal Navy and Dominion Navies, World War 2 by Don Kindell. Images of South African vessels courtesy Allan du Toit and reference from his book ‘South African Fighting Ships’.