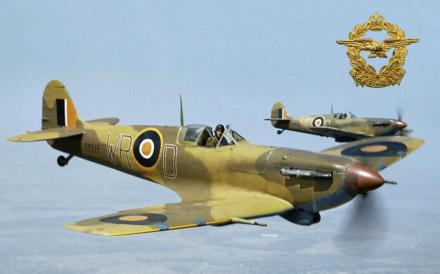 Original colour images of South African Air Force (SAAF) in Gabes in Tunisia April 1943.  Here we see a SAAF Supermarine Spitfire pilot of ER622, No 40 Squadron, SAAF as he confers with his ‘No 2’ after landing at Gabes.  This original colour image  shows off a key identifier that only the South African Air Force squadrons used in the Allied theatre of combat …. ‘Orange’. 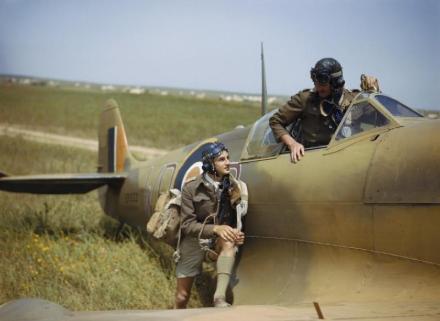 Note the distinctive ‘orange’ dot in the rondel identifier of the South African Spitfires, of all the commonwealth and British aircraft used in the north African campaign, the South Africans where the only ones to have the rondel in the colours of the ‘old’ national flag i.e. Orange, White and Blue on all their aircraft.

All others, British, Australian, New Zealand and Canadian air forces used a red centre in their roundel identifiers to signify the Union Jack (Flag) of Great Britain i.e Red, White and Blue, as seen in this original colour image below.

Also note the officers in first photograph are wearing army rank insignia (not air force), another distinctive attribute specific to South Africa at the time.  To compare the difference in aircraft identifiers, here is the SAAF scheme, as shown by these SAAF 40 Squadron Spitfires in desert scheme. 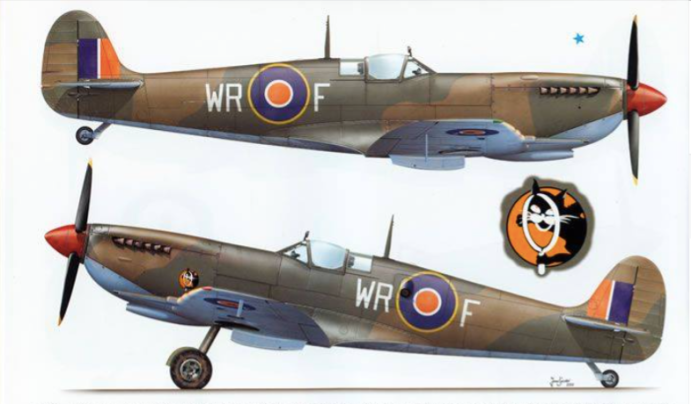 This distinctive difference in SAAF identifiers to RAF and other commonwealth county’s identifiers was given the SAAF because of Jan Smuts’ influence in forming both the Royal Air Force as the first independent air force and the South African Air Force as the second oldest independent air force.  Also, the SAAF had identified a separate scheme as they were not a ‘Royal’ Air Force – as the RAAF (Royal Australian AF), RNZAF (Royal New Zealand AF) and RCAF (Royal Canadian AF) were.

Squadrons made up of pilots from Allied countries under occupation also flew in the British markings, the difference was a small national identifier usually found on their cowlings, the Dutch 322 Squadron for example used a small Orange triangle and the Poles used a small Red and White square.

A little history of the SAAF Spitfires featured

As the 8th Army advanced through Libya into Tunisia, SAAF No. 40 squadron flew Tactical Reconnaissance (Tac.R) and Photo Reconnaissance sorties in support of ground operations.

SAAF 40 Squadron converted to the Supermarine Spitfire Vb at the end of February 1943. This variant had clipped wingtips to enhance its low-altitude performance, most notably its roll-speed. Sorties now included vertical and oblique photography, battle area Tac.R, target marking for fighter bombers, searches for night bomber targets, and identification of landmarks for day bomber navigation.

In early 1943 the squadron received Artillery Reconnaissance  training, however, unreliable radios meant that artillery shoots were not as successful as had been hoped. Nevertheless, the squadron continued to report the activities of enemy artillery.