With the commemorations of the Battle of the Somme offensive and the Battle of Delville Wood coming around every year, we remind ourselves once again of the hell endured by the South Africans fighting in the wood, known at the time as “Springboks” – and nothing says it more than seeing the mountainous piles of artillery shells fired at them.  In all during the battle 400 shells per minute were being fired into the South African positions no more than a square mile in size – and that went on day after day, hour after hour, minute after minute 400 explosions at a time – now imagine that sort of ‘hellfire’ and ‘sheer terror’ for a moment, and you’ll be in the mind of a Springbok soldier at Delville Wood witnessing it in 1916.

This World War 1 feature photo from the Herr Woerner Eugen Collection, shows the German side opposite the South African offensive at Delville Wood, this German soldier is overseeing the shell case dump nearby the wood.  That’s just the spent ammunition, so let’s have a look at the South Africans who took the brunt of this intense barrage and how they came to be there.

“Hold it at all costs”

As part of the initial Somme offensive, the British under Major-General Furse of the 9th Division, had to secure the advance on Longueval, but to do this, Delville Wood (a small wood directly next to Longuval) had to be taken first.  Major General Furse had no option but to commit his last reserve—the 1st South African Brigade to do it.

The 1st South African Brigade under Brigadier General Henry Lukin was ordered to advance and to capture Delville Wood on the 14th July 1916 and “hold it at all costs”.

The first attack progressed smoothly and by 07:00 the South Africans had secured the southern half of the wood,  by 14:40 the whole wood had been secured, with the exception of a strong German position in the north west adjoining Longueval.  The South African troops where now spread along the entire perimeter in groups forming strong–points supported by machine–guns.

But, rather than having “secured” the wood, the brigade was now in a trap, occupying a salient with only the south-western base being in contact with the 26th Brigade in Longueval. All troops were equipped with spades but digging within the perimeter of the wood was made difficult by roots and remnants of tree trunks from the previous day’s artillery fire, making the preparation of proper trenches impossible, with the South Africans having to make do with shallow shell-holes and burrows. With unprepared trenches, a narrow base to their salient and facing over 7,000 German troops, holding the wood was going to be extremely difficult!

The Germans launched one of the heaviest artillery bombardments of the war in an effort to dislodge the South Africans in the wood. It has been estimated that at its peak the rate of firing exceeded 500 shells per minute – even at one stage some references say 600 shells per minute were fired at the South African positions. To think this relentless volley of shelling was into a wood no bigger than a square kilometre in size.

The South Africans began to dig in beating off counter attacks as they did so. The roots and remnants of tree trunks made the preparation of proper trenches impossible and the South Africans had to make do with shallow ones.

The bloodiest battle hell of 1916

Of the 121 officers and 3,032 men of the South African Brigade who launched the initial attack in the wood, only 29 officers and 751 men eventually walked out. These men held their objective at a massive cost, even reverting to hand to hand combat to hold the wood  – the depth of bravery required to do this under this fire power is simply staggering to contemplate. The losses sustained by the South Africans were one of the greatest sacrifices of the war.

“…Delville Wood had disintegrated into a shattered wasteland of shattered trees, charred and burning stumps, craters thick with mud and blood, and corpses, corpses everywhere. In places they were piled four deep. Worst of all was the lowing of the wounded. It sounded like a cattle ring at the spring fair….” 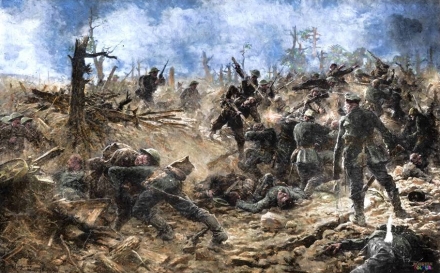 The battle is of particular importance to South Africa, as it was the first major engagement entered into by the South African 1st Infantry Brigade on the Western Front. The casualties sustained by this Brigade were of catastrophic proportions, comparable to those encountered by Allied battalions on the first day of the Somme. On the Western Front, units were normally considered to be incapable of combat if their casualties had reached 30% and they were withdrawn once this level had been attained. The South African Brigade suffered losses of 80%, yet they managed to hold the Wood as ordered. This feat has been described as “…the bloodiest battle hell of 1916.”

It was this horrific baptism of fire, of South Africans from across ethnic and cultural divides – fighting as one in union and strength, that the newly formed Union of South Africa’s national identity was forged for the years come.