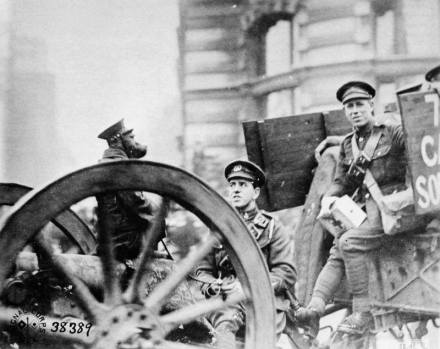 World War 1 and Jackie the Baboon is seen here on top of a carriage … here’s another famous South African mascot.  Jackie cut an odd figure amongst the British and Empire troops in Wold War 1, for only the South Africans could conjure up an African Baboon as a Regimental mascot, but this was no ordinary Baboon, intelligent and intuitive Jackie would achieve fame and become an iconic war hero in both South Africa and England, here is his story.

An odd choice of Mascot 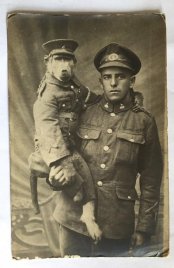 The story starts in August 1915, just over 100 years ago, at the Marr’s family farm ‘Cheshire’ in Villeria just on the outskirts of Pretoria.  Albert Marr found a Chacma baboon (Papio ursinus) on the farm, named him Jackie and adopted his as a beloved family pet.

World War I broke out and along with many other young South African men Albert Marr volunteered for military service. He was mobilised on the 25th August 1915 at Potchefstroom, allocated the rank of Private (Pte), his service number was 4927 and he was allocated to the 3rd (Transvaal) Regiment of the 1st South African Infantry Brigade, a Brigade which was earmarked to fight in France.

The 3rd South African Infantry Regiment, was under the Command of Lt Col E.F. Thackeray and raised mainly from the Transvaal (now Gauging) and Rhodesia (now Zimbabwe).  The Regiment was generally known as “The Transvaal Regiment.” B Company were mostly from the Witwatersrand Rifles while C Company were men from the Rand Light Infantry.

Distraught a leaving Jackie behind Pte. Marr figured it would be a great idea if his pet Baboon could come along with him, so he approached his superiors and (rather surprisingly) got their permission. At first Jackie’s presence was generally ignored, but he was so well-behaved and had such an impressive bearing that he was soon stuck out and the troops took notice of him.  In a short time Jackie was officially adopted by all as the mascot of the 3rd South African Infantry (Transvaal) Regiment,

Once officially enlisted Jackie was given the rank of ‘Private’ and a special uniform was made for him complete with buttons, a cap and regimental badges.  As with any enlisted soldier he also received a pay book and his own rations. He also drilled and marched with his company and would generally entertain the men – and such entertainment would prove invaluable in the months to come as a morale booster, especially to relieve the boredom caused by the stalemate of trench warfare once the 1st South African Infantry Brigade (and the Transvaal Regiment) reached France.

Jackie wore his uniform with some panache, he was also known to light up a cigarette or pipe for his ‘pals’.  He also had a sharp salute for any officer passing him. He would stand at ease when commanded to do so, placing his feet apart and hands behind his back in the military style. At the mess table he used a knife and fork as well as a tea-cup in the proper manner. 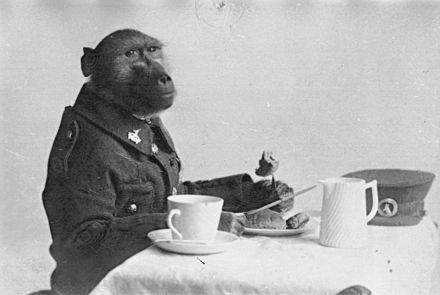 Albert Marr and Jackie became and odd pairing, absolutely inseparable and for all intents and purposes they became friends.  The two of them first saw action during the Senussi Campaign.

The Senussi were a religious sect resident in Libya and Egypt, who were allied to the Ottoman and German Empire.  In the summer of 1915, the Ottomans persuaded the Grand Senussi, Ahmed Sharif es Senussi to declare jihad and attack British-occupied Egypt.

The 1st South African Infantry Brigade along with other British forces was dispatched to Egypt to put an end to the Senussi Jihadi uprising.  At the battle of Agagia, on 26 February 1916, whist fighting the Senussi, Pte. Albert Marr was shot and wounded in the shoulder.

Whilst waiting for the stretcher bearers to arrive, a distraught Jackie became desperate to do something to comfort Pte. Marr as he lay on the ground, so he went about licking the wound. By this simple action of trying to comfort a fallen comrade, Jackie became more than just an animal mascot and pet in the eyes of the men in the Regiment, he had now become a fellow comrade.

Albert Marr recovered his wound and rejoined his Regiment.  Both Albert and Jackie then spent three years, on and off, in the front line that was the ‘western front’ in Europe fighting in the mud and blood of the trenches in France and Flanders.  Jackie was even reported to go “over the top” (advancing by breaking cover from the trenches) with the rest of the 3rd South African Infantry (Transvaal) Regiment during the heavy fighting in which they were engaged.

His sharper animal instincts proved highly valuable at night when on guard duty with Albert, he was particularly useful because of his keen eyesight and acute hearing. He would give an early warning of enemy movement or an impending attack by barking and tugging on Pte. Marr’s tunic.

Up to now he and Albert had come through the war in Europe relatively unscathed but in April 1918 that all changed, nearing the end of the war the 1st South African Infantry Brigade found itself been heavily shelled as they withdrew to Reninghelst in Belgium during the Battle of Passchendale.

To protect himself, Jackie was seen to be frantically trying to build a wall of stones about himself, as a rudimentary cover from shell fragments and shrapnel which were bursting all around him.

He never properly completed his protective wall and a jagged piece of shrapnel wounded him in the arm and another nearly severed his leg. At first Jackie refused to be evacuated by the stretcher-bearers; instead he tried vainly to continue building his protective wall, hobbling around in excruciating pain on what had once been his leg held in place by just sinew.

What happens next is best described in the words of Lt-Col R N Woodsend of the Royal Medical Corps who was the attending Doctor. 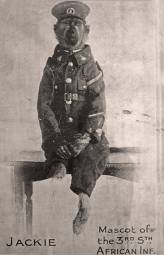 It was a pathetic sight; the little fellow, carried by his keeper, lay moaning in pain, the man crying his eyes out in sympathy, “You must do something for him, he saved my life in Egypt. He nursed me through dysentery”. The baboon was badly wounded, the left leg hanging with shreds of muscle, another jagged wound in the right arm.

We decided to give the patient chloroform and dress his wounds. If he died under the anaesthetic perhaps it would be the best thing; as I had never given an anaesthetic to such a patient before, I thought it would be the most likely result. However, he lapped up the chloroform as if it had been whiskey, and was well under in a remarkably short time. It was a simple matter to amputate the leg with scissors and I cleaned the wounds and dressed them as well as I could”.

He came around as quickly as he went under. The problem then was what to do with him. This was soon settled by his keeper: “He is on army strength”. So, duly labelled, number, name, ATS injection, nature of injuries, etc. he was taken to the road and sent by a passing ambulance to the Casualty Clearing Station.

It was unsure if the chloroform and the operation would kill Jackie, but funnily it was reported that when the Officer Commanding the Regiment went to check up on him at the Casualty Clearing Station, Jackie sat up in bed and saluted him. 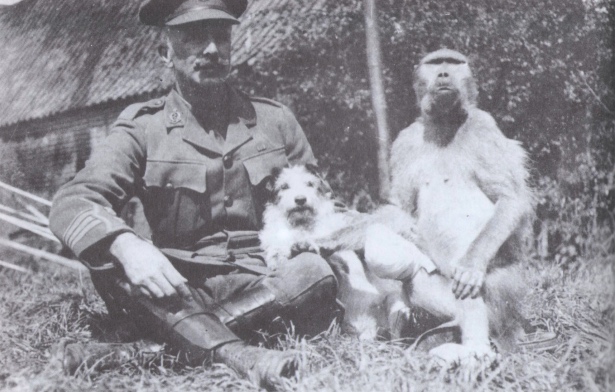 Jackie and Lt. Col R N Woodsend after his amputation.

It was the end of active service for both Pte. Marr and Pte. Jackie, the war ended shortly afterward on the 11th November 1918. They were both shipped to England, where Jackie immediately became a media celebrity in the English newspapers.

Jackie’s proudest moment in London was to participate in the Lord Mayor’s Day Procession (the featured image at the top shows Jackie and Albert Marr in this parade). From early September to 14 February 1919, Jackie and Private Marr were lent to the Red Cross by the War Office and the South African Government for the purpose of collecting money for sick and wounded soldiers.

They managed to collect a huge amount of money for the Widows and Orphans Fund by allowing the public to pay half a crown to shake Jackie by the hand and five shillings to kiss the baboon. 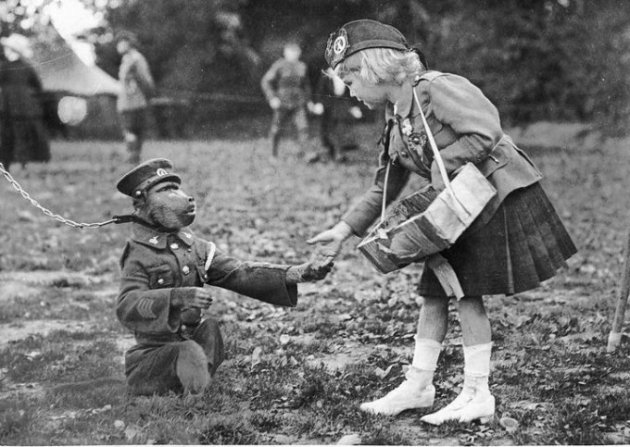 At Maitland Jackie received his official discharge papers, a military pension, plus a Civil Employment Form for discharged soldiers. By the 5th May 1919, both Jackie and Albert were on their last leg of their journey home to their cherished family farm near Pretoria.

After their arrival home, Jackie was again feted over and became the centre of attention.  He was front and forward on his official welcome home parade, and again lead the homecoming victory parade of the 1st South African Infantry Brigade, and again he was present at the Peace Parade in Church Square, Pretoria on 31 July 1920, where he proudly received the Pretoria Citizen’s Service Medal.

Albert Marr and Jackie returned to their family farm to recover from ‘shell shock’ (Post Traumatic Stress Syndrome PTSD), but the fragile state Jackie was in from the terrors of war tragically killed him on the 22nd May 1921. During an unusually intense highveld thunderstorm, he suffered a heart attack when an intense thunder-clap went off close by.

A sad end to one of South Africa’s most remarkable mascots.  He was mourned and much missed, especially by his friend, comrade and close companion, Albert Marr, who went on to live a long life and passed away at the age of 84 in Pretoria in August 1973.

6 thoughts on “Jackie; The South African Baboon soldier of World War One”