To many South Africans  ‘VJ’ day – Victory over Japan celebrations – the official end of the 2nd World War is seen as American, Australian and British endeavour and not really a South African one – but they could not be more wrong.  Little do they know that South Africa had official representation at the surrender – and for a very good reason.

The 2nd of September is a significant day in the history of the world, it’s the day Japan formally surrendered to finally end World War 2. The ceremony took place on the USS Missouri in Tokyo Bay in 1945, and the South Africans where right there too, represented by Cdr A.P. Cartwright, South African Naval Forces.

Cdr A.P. Cartwright is seen here, overseeing the signature of Admiral Sir Bruce Fraser on behalf of the United Kingdom on the Instrument of Surrender. He’s standing in the row of four naval officers left and right of General Douglas MacArthur (behind the microphone), Cdr A.P. Cartwright is on the far left. 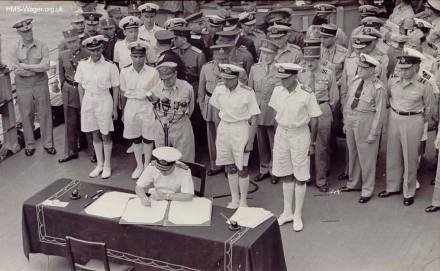 Cdr Cartwright was the senior South African officer on the staff of the American Admiral Chester Nimitz, the Allied commander-in-chief in the Pacific Ocean.

The ceremony aboard the deck of the USS Missouri lasted 23 minutes and was broadcast throughout the world.  This old newsreel footage captures the moment and is the only footage on the net taken from the angle which shows Cdr Cartwright standing with the British delegation at their ceremony (please excuse the poor sound quality).

General Douglas MacArthur’s speech summarised the sentiment perfectly, he said; “We are gathered here, representatives of the major warring powers—to conclude a solemn agreement whereby peace may be restored. The issues involving divergent ideals and ideologies, have been determined on the battlefields of the world and hence are not for our discussion or debate. Nor is it for us here to meet, representing as we do a majority of the people of the earth, in a spirit of distrust, malice or hatred. But rather it is for us, both victors and vanquished, to rise to that higher dignity which alone befits the sacred purposes we are about to serve, committing all our people unreservedly to faithful compliance with the obligation they are here formally to assume

The terms and conditions upon which the surrender of the Japanese Imperial Forces is here to be given and accepted are contained in the Instrument of Surrender now before you.

As Supreme Commander for the Allied Powers, I announce it my firm purpose, in the tradition of the countries I represent, to proceed in the discharge of my responsibilities with justice and tolerance, while taking all necessary dispositions to insure that the terms of surrender are fully, promptly and faithfully complied with.” 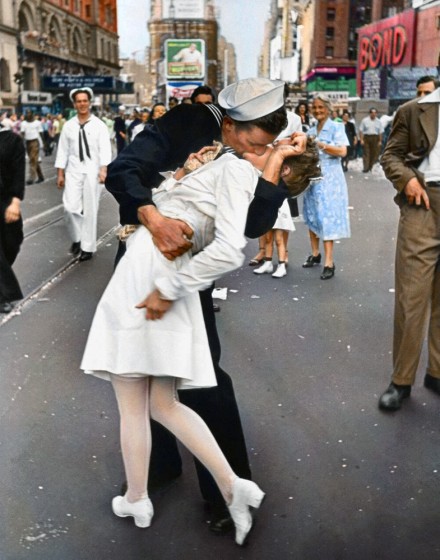 When the assembled representatives of the Allied Powers and of Japan had finished signing the agreements, General MacArthur, MacArthur saved his very best for last, words that put a closure not only to the ceremony, but to the entire war itself. He stated:

Let us pray that peace be now restored to the world and that God will preserve it always. These proceedings are closed.

A total of 297 South African Naval Forces (SANF) personnel were killed in action during World War II, and that excludes many South Africans serving directly on British ships as part of the Royal Navy.   Many of these South Africans were lost in actions against the Japanese – especially during Japan’s ‘Easter Raid’ against the British Eastern Fleet stationed at Ceylon (now Sri Lanka) which sank the HMS Dorsetshire and HMS Cornwall on the 5th April 1942 and the HMS Hollyhock and HMS Hermes on the 9th April 1942 – with the staggering loss of 65 South African Naval  personnel seconded to the Royal Navy and on board these 4 British fighting ships.  It was and remains the South African Navy’s darkest hour, yet little is commemorated or know of it today in South Africa, and this is one of the reasons why a SANF official was represented at the formal surrender of Japan.

The South African Navy acquitted itself very well during World War 2.  In all South African Naval Forces (SANF) personnel in World War 2 received 321 awards for gallantry and distinguished service. SANF officers and ratings served in nearly every major naval operation of the war as well as large contingents fulfilling duties in the Asian theatre of operations against Imperial Japan.