Job Maseko is a very notable South African hero of the Second World War.  He was a member of the South African Native Military Corps (NMC) and was decorated with the Military Medal for gallantry.  So how is it that a NMC member, a corps not allowed to officially carry firearms, gets to into the fight and wins this decoration.  Simply put he single-handedly blew up an enemy ship.  Read on for the story of a very remarkable man.

Job Maseko was employed as a delivery man in Springs before he volunteered for service in the Second World War and joined the South African Native Military Corps (NMC). After completion of basic training, he was sent to North Africa, attached to the 2nd South African Infantry Division.  Members of the NMC took up any support role in the Division which did not require the handling of a firearm.  They were given a vast range of different roles – anything from drivers, military cooks, engineers, stretcher bearers to bomb loaders.  South African race laws at the time provided that serving ‘black’ men could not carry firearms, they were however issued spears as a ‘traditional weapon’ for guard and ceremonial duty, but that was about it (see related Observation Post Dress and Bearing of the South African Native Military Corps).

128 000 ‘Black’ South African soldiers volunteered to take part in World War 2 (nearly 40% of the standing army) and members of the NMC often found themselves in perilous circumstances and were exposed to the rigours and dangers of war as much as any another soldier.  Some of these restrictions on the use of weapons quickly went out the window when in a combat zone, and somewhere along the line Job Maseko also learned a bomb making skill (see related Observation Post  ‘Armed’ SA Native Military Corps in WW2 – this Corps screams out for a definitive work!).

The fall of Tobruk 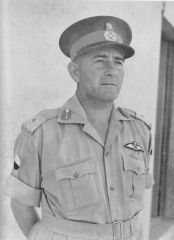 In 1941 the Australians had held Tobruk for 9 months, until Rommel’s withdrawal of his Axis forces to the west.  Tobruk secured, by 1942 the Allied Middle East Command decided to leave a smaller ‘temporary’ force to hold Tobruk while a new strike force was built up near the frontier.  The task of defending Tobruk was left to the South Africans. The new  garrison was to be formed by the 2nd South African Infantry Division with General Klopper, a farmer from the Orange Free State before the war, and a major general of only one month’s standing, given command of Tobruk.  In addition, units of British and Indian detachments fell under South Arican command defending Tobruk.  Into this deployment also fell our hero – Job Maseko.

It is generally understood that by this stage Tobruk’s defences were in a poor shape with much of the armour and artillery taken away to the new frontier, the Western and Southern sides of the port were well defended by the South Africans, but the East side was weak, and it proved to be fatal.

As usual, Rommel had devised a ruse for capturing Tobruk. Only his infantry approached the western perimeter, while his mobile forces swept on past, to give the impression that the German and Italian armour was heading straight for the Egyptian border (sending radio messages to that effect to complete the ruse).  He then swung his mobile armoured forces around and attacked Tobruk from its weak point – the eastern perimeter.

As the heavy artillery began to fire, the planes released their bombs and quickly got out of the way for the next wave, operating a shuttle service between the defence perimeter and El Adem airfield, 10 miles away. They pounded a gap open 600 yards wide. Behind them, under cover of artillery barrage and half-hidden by smoke and dust, German and Italian sappers raced forward to lift mines and bridge the tank traps with tanks and infantry racing through the gaps. As they move forward, they lit green, red and purple flares and the Stukas dropped their bombs just ahead of the advancing, multi-coloured smoke screen while the other planes and artillery blasted the South African rear (the seaward side of the port) with shells and bombs.

Into this desperate fight for survival went everyone, including members of The Native Military Corps. Job Maseko worked as a stretcher bearer, doing profoundly dangerous work, rescuing wounded men, as the defence of  Tobruk became more desperate, Job and other black colleagues were given rifles and expected to fight on the front line with everyone else.

Inside Tobruk the situation was chaotic. General Klopper – his HQ’s bombed out, his radio and telephone wrecked and his code booked destroyed, lost the last vestige of control.  Tobruk fell by the evening. Job Maseko became a prisoner of war (POW) on 21 June 1942 when Major-General  KIopper, surrendered to Rommel at Tobruk with 32000 men, including 10,722 South Africans of the 2nd Infantry Division, of whom 1,200 were members of the Native Military Corps.  It was the single biggest capitulation of South African forces in the country’s history – before or since.

Job and many others were forced to march across the desert to an Italian POW camp.  The Italian treatment of South African prisoners of war was nothing short of diabolical, however an even worse treatment was reserved for Black members of the South African Native Military Corps in captivity.  German and Italian forces displayed a complete disregard for the rights of coloured or black POWs as they did not view them as regular troops.

One account recalls how black soldiers were shot by drunk German guards while been marched to the POW camp, and the account goes further to say that in Tobruk camp, black South African POWs were forced “under threat of death” to do war work, which was contrary to the Geneva Convention.

Another report claims Indian and Black prisoners at Tobruk were not allowed to take cover whenever the Allied bombers later bombed the port, furthermore their food was totally inadequate – they were only given one packet of biscuits per day and water rations were kept to a minimum.

There were also examples of Black South African POW escaping from the camp perimeter with their white counterparts to scrounge for food in the town, and Job Maseko was one.  The Black POWs, as they were put to war work in the harbour (something most their white counterparts were excluded from) – mainly offloading ships.  Desperate for food they would sometimes return to the camp with ‘acquired’ sacks of corn meal (mieliemeal), one account from De Lisle recalls that the unfortunate consequence was that hungry English and  South Africans white POW would lay siege to their tents (the Black POW) at night to beg for their food.

The diabolical treatment of Black POW forced Job Maseko to taken action against his captors, to quote him “because of our ill-treatment by the enemy, especially the Italians, and because I felt it a duty in this way to assist my own people”. 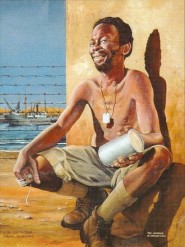 As with his Biblical namesake, Job was made of tough stuff and with the help of some comrades whilst on mundane prisoner duties to go down to the docks, Job created a bomb using a condensed milk tin, cordite taken from bullets and an extremely long fuse.

Job placed his home-made bomb deep inside the bowels of a German freight ship (and “F” Boat) that was docked in the harbour at Tobruk.   He skilfully placed it next to fuel barrels for maximum effect, lit the fuse and made good his escape.  Had he been caught, as a Black POW,  he would have certainly been put to death if not tortured first.

Job waited and later the ship shuddered from a huge internal explosion and sank almost immediately into the harbour.  After the war Job Maseko was able to point out the exact place where the ship was berthed and sure enough divers found it on the sea bed.

He later escaped from Tobruk and walked, for three long weeks though the desert and through enemy lines, all the way to El Alamein, he intended joining the battle there as he had fixed an old German radio he had found which informed him about General Montgomery’s epic and tide turning battle at El Alamein.  We still await the full historical account of this remarkable man as very little is known to this day, rest assured historians are now writing it.

For his actions, Job Maseko was later presented with the Military Medal (MM) by Major-General F H Theron. The following extract enshrines his heroism, bear in mind when reading this, it is made even more remarkable in that Job Maseko as a ‘black’ African could only be deployed in a non combat role:

The King has been graciously pleased to approve the following award in recognition of gallant and distinguished service in the Middle East:-

Citation
For meritorious and courageous action in that on or about the 21st July, while a Prisoner of War, he, Job Masego, sank a fully laden enemy steamer – probably an “F” boat – while moored in Tobruk Harbour.

This he did by placing a small tin filled with gunpowder in among drums of petrol in the hold, leading a fuse therefrom to the hatch and lighting the fuse upon closing the hatch.

In carrying out this deliberately planned action, Job Masego displayed ingenuity, determination and complete disregard of personal safety from punishment by the enemy or from the ensuing explosion which set the vessel alight.’

For his actions Job Maseko was initially recommended for a Victoria Cross but according to Neville Lewis, the first official war artist for South Africa during the Second World War, Job Maseko was awarded the Military Medal instead as he was ‘only an African’.  It is hoped that actions currently been taken by the SANDF Military Attache in the United Kingdom to redress this issue with British government and re-open his case so it will be met with a correct interpretation of Job Maseko’s actions without the ‘race’ factor as part of the deliberation, and his actions considered as one worthy of the Victoria Cross or not (as may be the case).

After been released Lance Corporal Job Maseko returned to South Africa.  “Apartheid” was to be implemented a few short years after the war ended in 1948 when the Nationalists came to power beating Smuts.  Job Maseko’s legacy slipped away from the general consciousness – along with many deeds of South African servicemen in World War 2, black and white.  He became a poor man and died in 1952 when he was accidentally hit by a train.  He was so broke at the time he was buried with borrowed money in the Payneville Township Cemetery in Springs.  A very sad way to see the end of a national hero.

Today, to honour this unassuming hero, the community of KwaThema near Springs has a primary school in the township named after him. The main road linking the town of Springs to KwaThema Township has also been named after him.  He is honoured at both the Delville Wood museum in France and the South African Museum of Military History in Johannesburg, A South African fighting ship the SAS Kobie Coetzee has also now been renamed the SAS Job Maseko in recognition of this very brave South African.

He can truly take the mantle of a proper South African warrior and stands shoulder to shoulder with all the other great South Africans who have earned the highest accolades of gallantry.