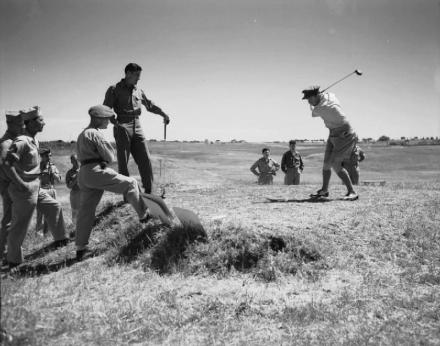 With a very special Masters finishing this weekend and Sergio Garcia achieving what has become one of golf’s truly special wins (especially on fellow Spaniard Seve Ballesteros’  birthday)  .. I am now reminded of a very famous South African golfer and war veteran – Bobby Locke, seen here taking some time off at a Services Golf Tournament held in Rome during World War 2.

When World War 2 interrupted Locke’s burgeoning career as a golfer, he joined the South African Air Force as a bomber pilot, serving in both the Mediterranean and the Western Desert theatres of combat.

At the end of the war Locke returned to golf, famously playing in a series of matches in the USA against Sam Snead.  Bobby Locke’s legacy is remarkable, triumphant and tragic. He was a four-time Open Champion Champion and winner of 72 professional tournaments, but a car accident in 1960 damaged him physically and mentally and had an ultimately devastating affect on his wife and daughter.

In terms of the game of golf Locke quickly realised: “No matter how well I might play the long shots, if I couldn’t putt, I would never win”.  He therefore became a magnificent putter, in many people’s opinion (including Gary Player’s) the best there has ever been.

His unorthodox playing style translated to his putting, trapping the ball and imparting a hooking, top spin to it.  He later coined the often used golfing maxim: “You drive for show but putt for dough”.

It was on the greens that this remarkable South African truly excelled. He used an old rusty putter with a hickory shaft and employed his unorthodox technique, echoing his wider approach to life. He was an extrovert who sported baggy plus fours with shirt and tie on course. He liked singing music-hall numbers and played the ukulele.

Bobby – or “old muffin face” as he was known (because he never changed expression) was inducted into the World Golf Hall of Fame in 1977.  He was only the second non-USA or United Kingdom entrant after his fellow South African Gary Player (1974) to be inducted.

Featured photograph above shows: Lieutenant Bobby Locke during the war, now serving in the South African Air Force, playing while Private Tommy Bolt, the American golfer looks on – note: on this occasion as he is in the Air Force he is not playing in his legendary baggy plus fours. 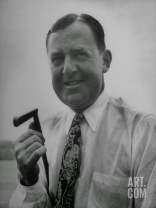 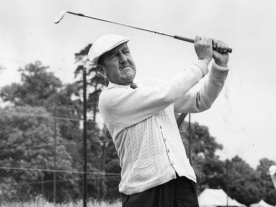 One thought on “WW2 SAAF Pilot drives for show and putts for dough – Lt. Bobby Locke”